Last Friday I was an invited speaker at seminar that the History Dept. here puts on twice a year for the graduate students at Helsinki's big World Heritage site: the Suomenlinna fortress; www.suomenlinna.fi/en will give you lots of information about the place.  As soon as I was invited, I put off visiting the site, which is on a group of islands about a 10-15 minute ferry ride from the harbor near campus and downtown.  The delayed visitation :-) made the trip even more fun. 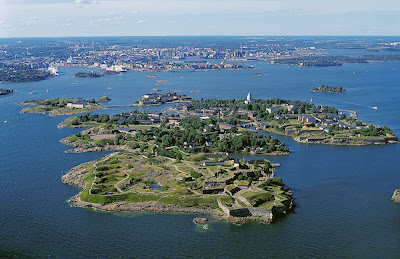 Suomenlinna itself is a huge fortress complex built starting during the mid-18th c. to protect the Gulf of Finland.  As a French historian, I think of it as Vauban on steroids, although I'm sure the 18th-century architects would be horribly offended as Vauban was quite old-fashioned by the time they were working.  Now one of its islands serves as the home of the Finnish naval academy (marked by many, very neat yellow buildings and impressively high walls) and the other 3 (I think) islands are a big tourist attraction, nice conference and meeting spot, popular party site for many Helsinki residents, and home to about 800 people. Yes, you can rent apartments in the old buildings on Suomenlinna and the island has the basic facilities of a small town including, because this is Finland after all, a small library.

Well, after having been sent a detailed itinerary (timing will be a key theme on this post), I showed up at one of the main ferry terminals and was relieved to see familiar faces arriving a few minutes later (one of the many advantages in attending the early modern seminar).  Soon the professor who leads those seminars arrived with the primary guest speaker in tow, and we piled onto the boat. 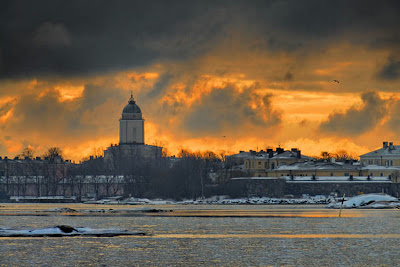 Approaching Suomenlinna's harbor.  (No, the snow hadn't hit yet, but I loved the photo.)
About the only thing you can see of Suomenlinna from the city is its church spire, which has at times also been a lighthouse.  Part of why it stands out so much is that it's on a rise, but it's also just a tall, little church because the stone buildings around it are generally several stories tall.

Once we arrived we came into the custody of our planner/guide.  Basically we had a person whose job was to make sure that everything ran smoothly and punctually the whole day.  She handled it fabulously and was very pleasant, but the obsession with time was absolutely hysterical to me.  For example, we had exactly 1 hour to walk from the ferry to the cafe, eat a 3-course lunch, and walk to the meeting room.  You should've seen the waitstaff at the cafe race to get the main course done and the attendees wolf things down for fear of being late!  Coffee was slammed down a la expresso.  I was giggling so hard as I hurried out the door that I almost choked on the Fazur chocolate that came with our coffee!  (Fazur chocs are delicious if you're a milk chocolate fan, which I am!)

But I'm ahead of myself.  Once we got off the ferry we had to walk about 2/3s of a mile to the cafe and meeting room, and it gave me a chance to get the basic lay of the land. 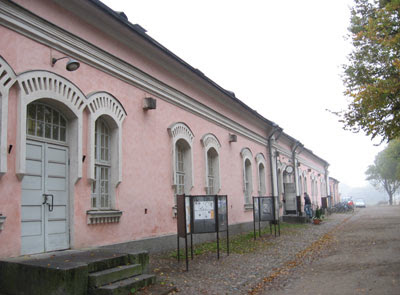 On the main island there are lots of streets like this one where older wooden and stone buildings have been converted into museum space, storage (which some probably have always been), residences, stores, etc.  Walking was, though, a bit of a challenge.  Most of the streets were cobblestone--not the picturesque flat cobblestones, either, but the round, widely-spaced mothers of cobblestones!  After living with those for years at Trinity and having lost I don't know how many pairs of shoes to them, they've lost any romantic appeal.  (God bless cement, asphalt, and other flat surfaces!)  Thank God I'd been smart and worn these great flats with cushioney and sticky soles.  As it was, by the end of the day I felt like I'd gone through PT for my ankle again! 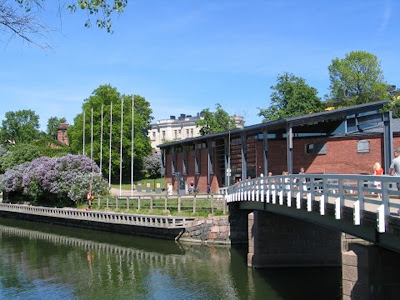 The bridge from the cafe to one of our seminar spaces.
The seminar itself was quite pleasant.  The theme for the day was integrating sources and presenting them to diverse audiences, and we had a well-known British early modernist as a guest speaker, 4 new(er) graduate students presenting their work in 10 minute sessions with 10 minutes for questions, a round-table on the topic with 3 of us presenting, and an audience of about 40-50 History graduate students and faculty.  What I found incredibly impressive was that everyone was expected to present in English and did so well without reading from a script.  Even better was that they were able to field questions in English, and as some of you know all too well, academic questions can be obscure in any language, much less in one that isn't your own.

I also found the room we were in to be quite appealing (I almost wrote cool, but nothing indoors seems to be cool in Finland.  In fact, I'm starting to find the buildings almost too warm!). 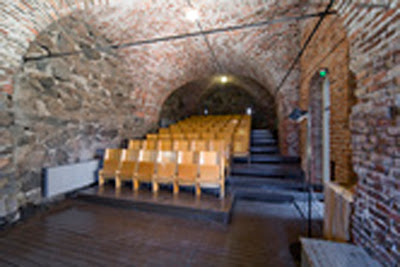 You have to imagine a podium with all the technological goodies plus a large table that can seat 3 people abreast in the area in front of the chairs.  Now, although the chairs look like either pews or some horror from an unrenovated 30s movie theater, they really were quite comfortable: lots of space in the seats and for the legs and a ledge that made a perfectly good writing table attached to the row of seats in front of yours.

So I settled into the second row and proceed to do what I'd been asked to do: provide at least one comment/question per student.  It wasn't hard to do, especially since all of the topics but the first were very well conceived.  In fact, the second one on electrification in 19th-c. Finland was REALLY good because the student was studying both the technical processes and the cultural significance; for example, what things did people assume about electricity, what aspects of electricity were connected in their mind (like lighting and spiritualism), how did class and education affect these beliefs and assumptions--really interesting stuff, remarkably well thought-out for a first-year PhD student.

In any case, after a full afternoon of presentations and a well-supplied wine reception, we meandered back to the dock about 5:30.  Since the weather was quite nice, I went up on the viewing deck with a few of the faculty and students to watch us approach Helsinki's harbor.   It was already dark, so the view was really great--lots of sparkly lights! 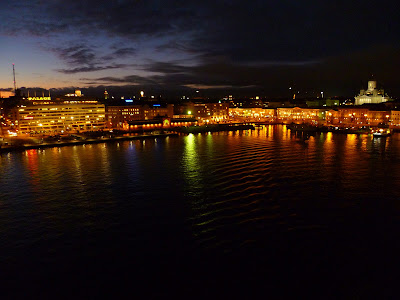 It turns out the building and hotel on the far left, the Palace, is a place where Helsinki's movers and shakers meet--which explains all the pricey restaurants near it and why I've never been there. 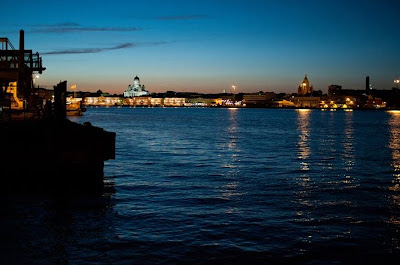 This is more like the view as we were leaving Suomenlinna initially, and we also got to see the night ferry to Stockholm leave.  It seems so much bigger on the water than it does in harbor. 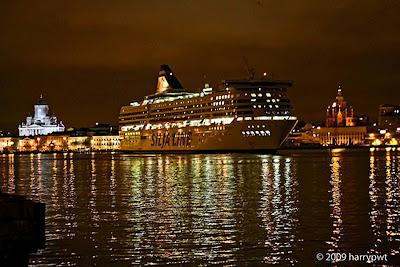 Once we got back to Helsinki, a lot of the group headed to a big, glass pub that's right in the middle of the main Esplanade park.  Unfortunately I had to let poor Ted out of his crate back at the Towers, so I missed that but I'll try to finagle it so that I can go out after the spring seminar--that is, if they invite me back.

By the way, sorry about the borrowed photos.  I brought a camera with me, but between the bataan death march to the various seminar sites (can't go off schedule, after all  :-)   ) and just plain embarrassment at being such a tourist, I couldn't bring myself to take original photos.  Then again, it's not as if no one takes photos of Suomenlinna!  (I'm tired, so I'm allowing myself double negatives!)
Posted by Kay at 7:46 PM

Since this is my first go at a blog, much less adding photos to almost anything, advice about design and such is always welcome--although it may not be followed! :-)

Kay
I'm a History professor enjoying a year's writing leave in Finland with my sometimes saintly, sometimes devlish Golden Retriever, Ted. The Finnish research institute is the Helsinki Collegium for Advanced Studies, otherwise known as the Collegium, where I hold a fellowship from the EURIAS (European Institutes for Advanced Studies). Figured I'd better get that out there because I use those abbreviations ALL the time!